Most of the information we convey is nonverbal. Body language plays a fundamental role in communicating who we are and is much more powerful and immediate than mere words. This is why it is necessary to consider objectives carefully and develop a strategy before producing and selecting photos.  END_OF_DOCUMENT_TOKEN_TO_BE_REPLACED Since the 2012 campaign, I have had the privilege of having conversations with political leaders and organizations all over the world. I believe that the best practices we learned from years of leading the Obama organization can be applied universally. At the core of our campaign were the people. It was the volunteers who showed up after work to spend hours on the phones. It was the mothers who brought their children along to knock on doors in their neighborhoods. It was the young people who shared information with their friends on Facebook. What we know now is that campaigns are constantly evolving, and successful campaigns will be the ones that are innovative and stay ahead of the curve.  END_OF_DOCUMENT_TOKEN_TO_BE_REPLACED

Pictures and figures can be seen in color and in greater detail, I also added some images that I could not include in the book. 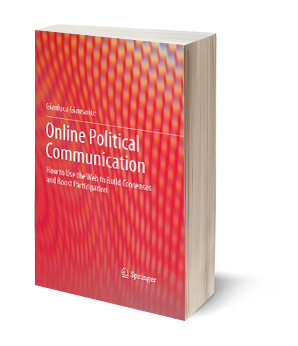